Member Login Welcome Back
Not A Member Yet? Learn More Today
Golf 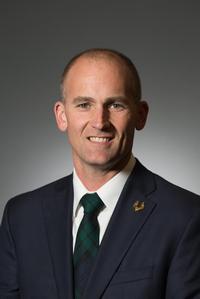 Nathan Charnes is from Evansville, Indiana, and has been with WingHaven Country Club since May 2004.  Nathan has many years of experience in the golf business coming from Oak Meadow Golf Club in Evansville, Indiana and The Links at Novadell in Hopkinsville, Kentucky.  He was elected to the PGA of America in March 2004, and has been exposed to a lifetime of golf management through his father, who is a Life-Member of the PGA of America.  Nathan possesses a history of success in overall country club management, team building and leadership, managing golf operations, merchandising, tournaments, corporate outings, teaching, and delivering high level member service and events.  In 2005, Nathan was named the Gateway PGA Section Assistant Professional of the Year.  In 2008, he was named the Gateway PGA Section Horton Smith Award Recipient for his dedication and commitment to PGA Education and Mentoring.  2012 was a banner year as Nathan received the highest annual honor bestowed by the Gateway PGA - Golf Professional of the Year.  Nathan served his local PGA Section for 8 years and was recently elected to serve on the National PGA Board of Directors as District 7 Director from 2018-2022 representing the Gateway PGA, Midwest PGA, and South-Central PGA Sections.  More importantly, Nathan has been married to his wife since 2003 and has 3 wonderful children who share his love of faith, family, sports, and the St. Louis Blues / St Louis Cardinals.

Ï  Appointed to the National PGA Membership Committee, term from 2010 to 2012.

Ï  Appointed to the National PGA Member Benefits Committee, term from 2015 to 2016.

Ï  Elected to serve on the National PGA Board of Directors for District #7, term from 2018 û 2021.  District #7 represents the Gateway Section, the Midwest PGA Section and the South-Central PGA Section.

Ï  Section Board Member/Secretary û Elected to the Board of Directors in 2010.

Ï  Member of the St Louis Chapter of the Club Managers Association of America.